Of Palazzi and Patience

I’ve just got back from a week’s holiday in Venice. I’d never been before – a combination of time, money, and (I freely admit) a rather teenager-ish eye-rolling that came into play, a few years ago, when it seemed that everyone I knew was going to Venice and coming back telling me how marvellous it was, which I responded to by absolutely not wanting to go. Plus, my two strongest literary associations with the place were Thomas Mann and Daphne du Maurier, and neither dying from cholera nor being attacked by a creepy dwarf struck me as appealing prospects.

I suppose the most zealous advocates are always the recent converts, and I’m reluctant to write a great, gushing paragraph about how wrong I was, and how utterly, breathtakingly beautiful it is. But I was wrong. Very. And it is utterly, breathtakingly beautiful. So much so that I spent most of the week in a sort of moist-eyed head-spinning daze of not quite being able to believe that it was all real. The photos I took already look like disembodied souvenir shots. One of the friends I was with, who is far better travelled than me, remarked that it looked like a Hollywood film set, and he’s absolutely right – it’s actually easier, somehow, to perceive it as a fake. Because the level of magnificence, and of stagedness about it, seems too incredible to be true. And yet there it is. 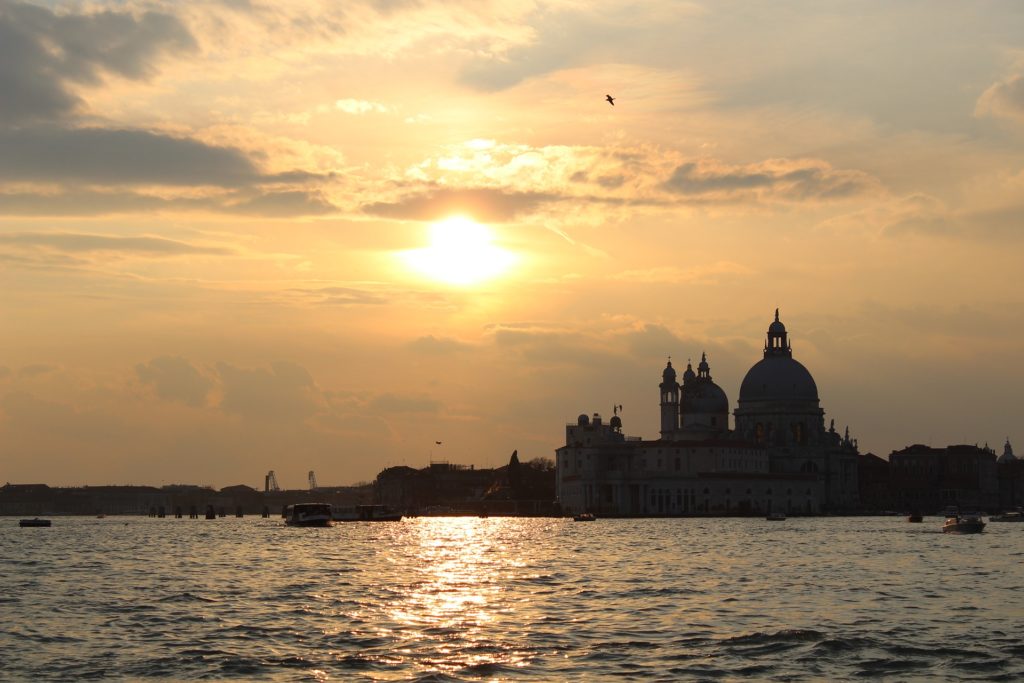 But there’s something else about Venice that makes it even harder to ignore its magnificence than just how much of it there is (and how old it is, too): you can’t do anything quickly. It’s just not possible. There are no roads, and there are no cars. There is no railway line except the one that takes you back to the mainline. Thinking about it, I don’t remember spotting any bicycles either – in fact, wheeled vehicles of any kind are tricky because of the number of tiny bridges with steep steps. (Parents with children in buggies and wheelchair users are at a serious disadvantage.) If you want to get anywhere, there are basically only two ways: by boat, or on foot. And most of the canals are narrow, and most of the streets are too, with steep turns and footbridges to further slow you down.

The impact that this has – on everyone and everything – is truly remarkable. The vaporetto lines (floating buses, basically) run relatively frequently but are not enormously quick, because the canals seldom go in straight lines. In fact, if you look at a map of Venice, the Grand Canal running through its middle, it looks not unlike a narwhal trying to bite the head off another fish. North to south, and east to west, take a while. And that’s not just the route for commuters; it’s also the way that deliveries arrive, bins are emptied, builders must transport their equipment (it’s the first time I’ve ever seen a floating JCB) and so on. As far as I could tell, there was also no particular rhyme nor reason to who got to use which side of the canal, with vaporetto routes looping from one extreme to another and gondoliers nonchalantly pushing out in front of delivery boats in the apparently certain knowledge that they would slow down in time to avoid a collision.

Speaking as someone who generally walks at quite a pace, you might think, then, that I could still get speedily through the place on foot – it’s not big, after all. But even allowing for the fact that I spent most of the time staring around and gawping at all the churches and palazzi, it’s not particularly easy to walk quickly either. Other tourists dawdle, of course. But alleyways are small, routes from A to B are often looping and dotted with canal crossings, and if you don’t know exactly where you’re going, dead ends jump up rather more frequently than you might suppose. Besides, in a place where the fastest mode of transportation is boat, and the fastest way to collect rubbish is to send off little fleets of people with handcarts who had to relay them back to the single craft waiting to take it all away, why dash?

Now, don’t get me wrong. I was on holiday, and people behave differently on holiday than they do when they are living and working in a place full time. But the absolute peace and quiet, the lack of huge illuminated shop signs, the total impossibility of high-level mechanical and human hustle and bustle, and above all the speed at which everything moves, was a revelation. Because in comparison, in our day to day lives in British cities and towns, we are always so fast. And fast can be great, fast can be energetic and direct and to the point and efficient. But it takes time to do so many things that we, as humans, also value. To really look. To really listen, or taste, or feel. To think. If I had to define the most revelatory aspect of growing older (not growing up – I intend never to do that, if humanly possible), it’s realising that the things you were told as a child, the simplest sounding statements, are profound truths that go way beyond the words that make them up. Beauty (or indeed, evil) is in the eye of the beholder. Love is blind. What is this life if, full of care, we have no time to stand and stare? It remains amazing, to me anyway, how a new experience or a new place, can change your point of view, and make clear things you hadn’t noticed before. Here’s to us all having many such moments.